Our daily lives can be very fast paced. Sams  preschool, appts for this that and the other seemingly every week. They can be a chore and more than once I’ve forgotten one of them. Add to that the whirling dervish himself and yeah it’s a head spinning situation. Developmentally though Sams life runs in slow motion. A lot of Sams development is below that of a 3 year old. He’s 5 in December. He can’t dress himself, he still wears nappies. Every milestone is developmentally way behind your neuro typical child. Because of this every one of those milestones are more than huge to us. They are ginormously off the scale.

When he started pre school last year he only really said ‘go’. He couldn’t (or wouldn’t 🤔) follow instructions. He didn’t play with children in class or even seem to notice them. He was very quiet (meltdowns aside) through it all though he’s been a cheeky little monkey that everybody loves very much. It help when you’ve got a face like butter wouldn’t melt though!! 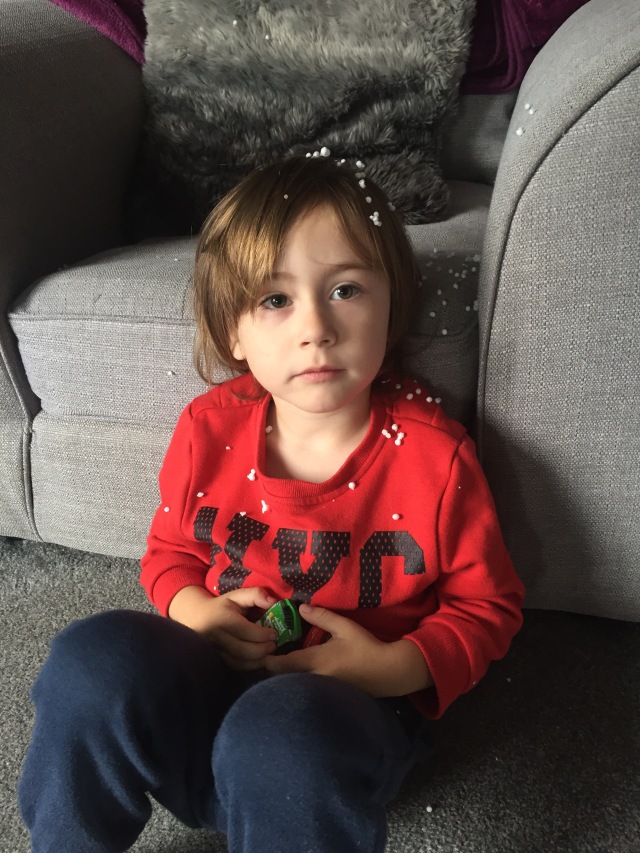 ^^just got his hands on some polystyrene^^

This year has been massive for Sam in our terms. With the help of a team of professionals and the good luck of being in a preschool attached to his (hopefully) school with the most caring team of teachers, Senco and his personal TA Vicky he has gone from that boy I described above to one that now can say lots of words!! The care and patience shown to him this past school year has gone above and beyond my expectations!!

He doesn’t always say his words in the right context but he can now say:

No, go, car, down, where are you!! Hi, bye, thank you!! Again, choo choo, lots of animal noises and when prompted ‘I. Am. Speed. I. Am. Lightning (massive Cars fan!) Again prompted, its. Time. For. Tickles 🤗

He follows instructions (when it suits him!) He plays running down the hill with his little preschool friends. He’s learning to take turns and will sit on his TA’s knee for a spell at circle time. We’ve had a year of tiny miracles that allow me to see the boy I know has so much in his head taking shape.

Tonight was huge to us as well. He came to the dinner table. His bottle was missing and he came straight up to me and said juice!! This is huuuuge. I can’t explain. Then when we got out of the bath; he picked up his pj top and bloody well put it on!! He did it independently!!!! I am so proud of him for all of these things. I know for sure it will all come in time. Good things are to come for my boy and I can’t wait to celebrate each and every tiny little one 💙